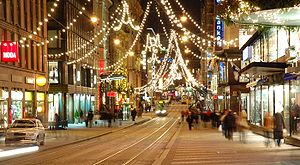 November 1st; another holiday concluded and a new one to start budgeting for. I know most of you don’t want to hear the word Christmas prior to December, but Christmas is the most expensive holiday for the average family. If you want to keep your family budget underneath that average family spending for Christmas, you are better off planning early.

You know the drill by now. This is one of those posts where I cleverly break down consumer spending so that you are more knowledgeable when it comes to your own budgeting. It’s why you love this blog. So, before you make your family’s Christmas list, here’s what the average family is spending as reported by  The National Retail Federation.

This is total Christmas spending. The average gift budget is $548.56, which is up only about $6 over last year.

One interesting conclusion that consumer researchers at NRF found was that families have moved on from “needed” frugality to a new “practiced” frugality. In other words, the recession has forced families to make tough choices on spending and those habits formed are persisting beyond the recession.

Breaking Down the Gift Budget

Here’s the part where I get to throw around some corporate jargon that I get to use every day at my job! Let’s “drill down” a little further and look at how the average family distributes that gift budget across the people they know.

Gifts for family will make up an average $421.82 of the total budget. Friends can expect $75.13. While Co-workers get $23.48. That leaves $28.13 for other acquaintances like teachers, postal workers and paperboys.

When Do Average Families Start Shopping?

Most Popular Ways of Saving During Christmas?

The Holiday of Me

The season of giving is very popular with everyone’s self. One interesting trend over the last few years is the growing popularity of me gifting. Roughly 59 percent of shoppers plan to spend an average $139.92 shopping for self this holiday season.

I hope Santa’s Workshop is reading. Based on the NRF survey, the most requested gifts this Christmas are:

Goofy looking Christmas sweaters, ties and socks were not mentioned…surprisingly. Although we all know that they will be abundantly plentiful under the Christmas tree.

That’s it families! Now that you are empowered with the knowledge of average Christmas spending, I leave you to wisely craft your own budget. Please leave me some insight into your own spending in the comments!

PS – I was wondering if you would actually ask. Yes, men are overspending women with an average gift budget of $567.61 to $530.60. I guess my post on “Women finally spend more than men on gifts” post will remain in its dusty corner of saved drafts for yet another holiday.

What’s your family Christmas gift budget look like? Is the average family spending too much or is it just right? How are you saving money this year? Are you planning on splurging for yourself? Will men ever beat women on gift spending?