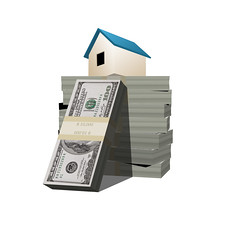 Sometimes it’s good to be a loser. Losing weight is considered positive. Losing all of your debt is never a bad idea. Can we all agree that involuntarily losing your wealth is a bad thing?

The wake of the Great Recession washed away a great deal of family wealth. According to the St. Louis Fed, over $17 trillion in household net worth vanished at the height of the last economic downturn. Average household equity dropped by 25 percent and stock investments by more than 50 percent. Most families lost wealth, but some were hit harder than others.

Young Families Lost the Most

Young families hold the title for biggest losers of wealth. The St. Louis Fed showed that the average household under the age of 40 lost 43.8 percent of its wealth. This statistic makes a lot of sense. Most Americans hold wealth in the form of equity. Young families bought new homes at the peak of the housing bubble. Since young families don’t have much else in terms of wealth, they were highly susceptible to the market crash.

As per usual, traditionally disadvantaged minorities also made the list of top three biggest losers. If you were African-American or Hispanic, your median decrease in family net worth was 37. Comparatively, white families lost roughly 11 percent.

College graduates held on to nearly twice as much wealth than non-college grads. The Fed found that families without a college educated parent lost a median 22 percent of wealth. College graduates, on the other hand, lost a mere 15 percent.

It’s common for college graduates to outperform non-graduates in matters of personal finance. Economists believe that the added education translates into smarter money decisions. Who knew education could make you smarter?

So, if young, minority, non-college graduates lost the most wealth, who do you think lost the least? Why old, white, college graduates of course. Between these three demographics, the greatest loss of wealth came with having a college degree (15 percent). Those 55 and older lost a median of 11 percent and those of white complexion saw a reduction of 11 percent.

The big problem with groups who lost the most wealth is over-dependence. Each of the three biggest losers saw large decreases in wealth because most of their net worth was held in home equity. Although historically home equity has been a great source of wealth for these groups, the recent housing bubble has challenged this tradition. In the most recent recession, total losses in equity trumped the losses suffered by the stock market. Home equity isn’t the safe wealth creator that it has been for past generations.

How did your wealth increase/decrease during the last recession? Did your home equity increase or decrease your wealth over the last four years? Do you identify with any of the findings from the Fed study?