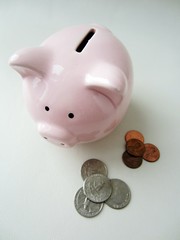 I like to kick-off my posts with a bit of excitement. What could be more exciting than a race?

Three men, Mr. Income Over-Achiever, Mr. Frugalista and Mr. Procrastination want to race $100,000 for a year to see who earns the greatest net worth. So they all go to the local 7/11 and pick up a scratch off ticket. Lucky for these men, they aren’t real, which explains why each of them wins the $100,000 they need for their various investments.

Mr. Income Over-Achiever decides to take his money and invest in his 401k plan. So he directly deposits $100,000 from his paycheck into his employer account and for some reason, the government waives the maximum contribution limitations. In one year his investments earn 7 percent after fund fees and he is feeling quite superior with his $107,000.

Mr. Frugalista is really worried about all the debt he took on last month by buying a home. He decides to pay the balance of $100,000 on his home worth $100,000. The housing market appreciation has finally rebounded from record stagnation and Mr. Frugalista’s home appreciates 3 percent to $103,000.

Mr. Procrastination didn’t do anything with his money. He just sat home and watched all four seasons of Battlestar Galactica over and over again. By the time it was ready for his annual shower, he realized that he hadn’t made any improvement on his net worth. Let’s assume zero inflation 😉

Ok, who is better off? Here is the net worth recap

If you said Mr. Income Over-Achiever, you need to listen to the rest of the story.

Why Net Worth is a Liar!

Let’s kick up the intensity of the post with a little infamy shall we?

A crew of kidnappers was in the store when the three money racers won their combined $300,000. They spent one year planning a foolproof plan to ransom the men’s wives for $100,000 a piece.

Mr. Income Over-Achiever cashed out his 401k to pay the ransom, but after 25 percent in income taxes and a 10 percent penalty for withdrawing before the age of 59 ½, he only had $70,250 to pay the ransom. He had to rob a bank to make up the nearly $30,000 he still owed the kidnappers and spent the next 25 years in state prison.

Mr. Frugalista sold his house to pay off the kidnappers. Luckily, he got the market value of his home -$103,000. However, he had to pay the realtor a 6 percent commission. That left him with $96,820 to pay the ransom. He borrowed the rest from mom and moved back in with his parents.

Mr. Procrastination simply handed over $100,000 and went back to watching Battlestar Galactica.

That’s weird? What happened to Mr. Income Over-Achiever? His net worth was far greater than any of his friends, yet when it came time to convert the value of his invested assets to cash, He had about two-thirds of the money he boasted. Mr. Frugalista had estimated his net worth to be 6 percent higher than what cash he could actually bank.

How can that net worth number you’ve been tracking so diligently, be so incorrect when it comes time to convert financial instruments?

Now, before someone points out that Mr. Income Over-Achiever should have put his money into a Roth IRA instead of a 401k, you need me to explain the dangers of listening to net worth’s lies.

Net worth is nothing more than your nest egg and a nest egg is useless until you use it. If you want to become wealthy, you will probably need to invest in various financial instruments and that means paying conversion costs when you want to use your net worth.

Your equity might be part of your net worth, but it’s not really how much money you’d have converting your house to cash. You may want to add your trade account balances to your net worth, but after taxes, you’ll only have a fraction of your statement totals. Net worth rarely tells the truth about how much value in cash you really possess. When you make financial decisions based on maximizing net worth you run the risk of holding less potential value than alternatives in a world of financial vehicles.

Use Different Financial Conversion Rates to Your Benefit

Now you can bring up investing in a Roth IRA. The rules of the Roth IRA would have let Mr. Income Over-Achiever take back his $100,000 and keep his $7,000 locked away for retirement. This world is full of financial instruments and many of them have various advantages and disadvantages when it comes time to make conversion from wealth to money.

It’s not good enough to simply seek maximum net worth and leave costs out of your financial decisions. These costs can have a major impact on the true value of your wealth. I don’t know about you but I’d rather command actual value than have an impressive net worth number on the top of a piece of paper.

Do you know your own net worth and if so, how much of that number could you actually get if you needed to spend the money? Do y0u used different investments to take advantage of different conversion costs? What your conversion cost strategy?