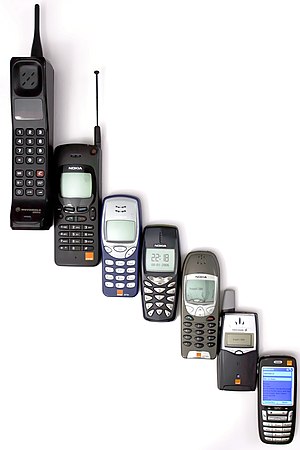 Verizon has a new smart phone data plan called the Share Everything plan. Starting June 28th, all Verizon users have the option of switching out of their old plans to sign up for the latest plan du jour. Being a Verizon user, I’m now faced with the choice of keeping my current plan or switching to the Share Everything plan. The new plan works well for my family, how about yours?

The Evolution of the Family Cell Phone Bill

It all started with $15 per month. That was my first cell phone bill. Of course, I also was paying $.05 per minute. The phone was a giant analog phone that you had to pull out the antenna before answering the phone, it looked a lot like the second cell phone on the left in the picture. If you added the cost of my pager, which was $5 per month, my bill was around $25 back in 1998.

For my second phone, I updated to digital. The phone finally had address book functionality, so I stopped carrying around my little black book. The plan also came with voice mail and the ability to scroll through missed calls. In other words, my pager retired. The plan was a little more expensive at $25, but overall, my bill did not increase. Paying for minutes was gone for good. I was given a monthly allotment, which has always worked for me since I barely talk on the phone.

Fast forward to today and my phone is a miniature computer more advanced than what Captain Kirk was using in Star Trek. I upgraded my status to married and have an additional phone on the plan, which means that minutes suddenly matter. There are extra frills like texting and data plans.  It’s a challenge for any family to keep the bill under $100.

The Share Everything Plan isn’t the plan that will get you back down under $100, but it might save you some money if you have lots of data plans.

The biggest plus to the Share Everything plan has to do with the features in the cell plans. You get unlimited minutes, unlimited text, unlimited photo and video texts. The phone plans cost $40 per smart phone and $30 for each stupid phone. It also costs $10 for a tablet to get direct access and $20 for a portable hot spot.

Whenever you add things, you can expect deletions. The Share Everything plan will retire the old unlimited data plans. It also does away with the $20 monthly fee for hot spot capability.

The most noticeable difference is the new Share Everything concept; one data plan that is shared by all your devices. Data plans start at $50 for 1G. It’s quite a climb from the standard $30 plans most smart phone users enjoyed. There are data plans with bigger usage, but they cost more. The 2g plan is $60, 4G is $70 and 6G is $80.

Why the Share Everything Plan Works for My Family

Remember when I was thinking about getting a smart phone to boost blog productivity? Well, I did in fact break down, did the exact opposite of Modest Money and bought a smart phone. When I say ‘buy,’ what I mean is, I got a free Droid phone with a rebate and purchased a pricey, but very useful plan for my new phone.

My family has been paying $85 for phones and texting. I wanted to be able to blog on my lunch breaks, which meant finding a way to get my laptop on the internet, easily and from any location I could find to work. My solution was a data plan and a mobile hot spot, which was an additional $50. Thus, my family cell phone bill is $135.

However, with the Share Everything plan, my family would save $15. Our two phones together would cost $70 instead of $85. My wife and I would both have text and unlimited minutes. However, my data plan would drop from 6Gs to 1G, which is very close to my actual usage.

Why the Plan Isn’t Great for Most Families

Most of the savings in the plan will come from the new cell phone plans. Phone bills would run up to $60 depending on the minutes and texting volume that you used. The new phone plans are greatly reduced and will save you money, but the data plans are a different story.

Given the amount of data usage you get on Share Everything, the data plans are expensive. A family with two smart phone users is already paying $60 for two plans. With the Share Everything plan, the same data plan cost gets you only 2G to share between the two of you.

Where you start to see savings from data plans is if you use more than three devices. Let’s say a family has two smart phones and a tablet. This is usually a $90 expense. Families would probably do well with a 4G or a 6G plan at $70 or $80.

The plan also works very well for families that have very low data usage. You can load up to ten devices onto your plan. So long as you don’t exceed 1G, you could be getting a deal at $50 for data usage.

The new plan works well for my family, but only because I’ve been using mobile hotspot and my usage is much lower than my previous plan. This isn’t the case for most data plan users. Most families have one smart phone at best, which means there won’t be any cost savings for switching plans.