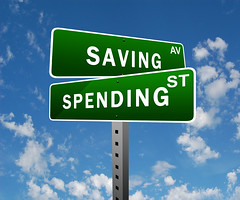 Generally speaking, I’d say that the land of personal finance blogging is a land of harmony. There are few disagreements about the merits of various decisions, but not perfect agreement. For example, let’s say that I want to increase my savings; should I focus on cutting the frills from my budget or pursue new sources of income? Although most writers would agree that both are useful, bloggers tend to split into two groups: Frugalistas and Income Over-Acheivers (I needed a name so I made one up).

Frugalistas are the group of folks washing their hair with baking soda and reusing plastic bags. They shun my excessive use of un-rechargeable batteries and penchant for buying new pants when I get a seam rip. I won’t even go into my recycling of whip cream containers instead of reusing for food storage. You can watch them in action on their shows on TLC. The goal is to cut out all unnecessary spending and live  life on nothing but soda and free potato chips acquired through a 4 month stash, totaling 70 coupons. It’s a lifestyle of unending spending cuts.

Income Over-Achievers are the bloggers always talking about something called passive income, which is billed as earning money for doing nothing, but in reality translates into working multiple jobs, that added together, equals one second job. They extol investing, rental property, blogging for money and entrepreneurship. These guys are retiring at 55, because their bodies aren’t going to handle one day of work beyond 56. It’s a lifestyle of unending income acquisition.

My dilemma is that I find sense in both points of view. I do have purchases that are excessive. I can’t deny that without them my budget is better off, but those purchases do make my day more enjoyable. On the other hand, who can argue against earning more money? I have plenty of talents. I could earn a little extra money, keep my frilly budget and actually increase saving at the same time.

I spent a little bit of time over-analyzing this financial decision and determined that, in the end, frugalistas have the stronger position. Here’s why you ought to consider cutting your budget instead of expanding your income.

Cutting Your Budget is Tax Free

You know the drill. The more you make, the more they take. By “they,” I mean the people writing all the laws and receiving free healthcare for life  and working only  about 25% of the year; government.

At the very least I’m looking at 14% for employment taxes, 8% for state income taxes and another 15% for federal income taxes. It doesn’t matter how awesome my revenue per hour looks, by the time I subtract expenses and give the government 1 of every 3 pennies earned in income, my hourly rate is going to be much smaller than the check I’m cashing.

On the other hand, it’s tax free to cut your budget. One dollar of budget savings is, at a minimal, one full dollar earned.

Most budget cutting takes little or no time at all. If I wanted to cut out the occasional cup of McDonald’s coffee, all I have to do is not buy one and I’ll save a few minutes in the drive-thru as well. I’ve seen extreme couponing so I know that pinching pennies can be a time drain, but earning money always takes time.

Let’s take blogging, of which, many bloggers would agree can pay well. How many hours went into the content, creating the site, networking and commenting on other blogs? It might pay well, but it still takes a great deal of time.

Most People Have a Spending Problem

If the house is on fire, do you find more fuel for it to burn or do you try and put it out? Many people do have income generation problems and who couldn’t use more money? However, most people have a problem with spending. Budget cutting addresses that specific problem, but income earning could delay the health decision of moderation.

I believe there are merits to both approaches, but if you had to pick just one, I’d say frugalistas have a greater argument and I speak from experience. Over a year ago, my family had to find a way to make due on one income instead of two. We aimed at cutting out budget and earning more income to weather the financial storm. While we’ve managed to earn far more money from side hustles than I ever dreamed, it’s the budget cuts that have really had the largest impact; in total savings and time spent.

Where do you fall? Are you more of a frugalista or income over-acheiver? Where do you draw the line with each?